With the Divine Grace and blessings of our Beloved Bhagawan Sri Sathya Sai Baba , the devotees of  Sri Sathya Sai Seva Organisations (India), Kancheepuram North District , Tamil Nadu set out on Holy Parthi Yatra from 20.6.2019 to 23.6.2019 to Prashanthi Nilayam , Puttaparthi to pay obeisance to our Beloved Lord!

‘CEILING ON DESIRES’, the most important Code of Conduct emphasized by our beloved Bhagawan was embraced as the theme of the Parthi Yatra. The theme was displayed at various places like train, mandir, and ashram premises with Swami’s quotes. The Divine journey by over 1400 devotees on a chartered train to Puttaparthi was marked by devotional fervor and overflowing Love to the Almighty!! The excitement of many first-timers on stepping into the Divine portal after several years of longing and pining was evident in their child-like enthusiasm and awe at the sight of heavenly Sai glory everywhere!!

Cultural programmes were offered to the Divine Lord by the District Balvikas Children, Youth, Mahilas and Gents and the Disaster Management team during their spiritual sojourn at the Holy abode. The evening session of June 21st comprised of Veda parayanam by Balvikas girls, a brief talk by the District President, “Layarpanam”, a musical ensemble of mridangam performance by the Balvikas boys followed by soulful rendering of Bhajans.

Sai Soul Dears’ a remarkable drama on the selfless noble service undertaken by the Disaster management team, was very effectively presented by the District Gents Youth team with Live demonstrations of the disaster scenarios and the practical management techniques to adopt when encountered with such critical situations in real-time. The Sai Soldiers of the Disaster Management Team aptly concluded the Drama by proclaiming themselves as ‘Sai Soul Dears’, the ones dearest and closest to Bhagawan in heart and soul, rightly justified indeed, due to their single-pointed dedicated involvement in Bhagawan’s most loved mission of Disaster Management!! The drama ended with a video presentation on the Disaster management team’s various initiatives across the nation. Delightful bhajans by the Gents Youth team marked the end of the cultural celebrations on the first Day.

The morning session on Jun 22nd commenced with Pallaki Seva of our Beloved Bhagawan by the office-bearers and members of Kancheepuram North district. The Mahila Youth members presented a programme titled Sai Parijatha, a bouquet of musicals interspersed with ‘Experiences with Swami’. They shared their life defining and soul stirring experiences with the Lord, which was coupled with devotional renditions. Sai bhajans were rendered together by the Balvikas boys and Youth girls from the district thus concluding the morning session.

Out of 55 mahilas who had completed the Vocational Training programme in Tailoring from the Madipakkam Unit – recent batch, 21 members had joined the Divine yatra to pay their respects and gratitude to Bhagawan. Training Completion certificates were distributed to them in the Holy precincts of Prashanthi Nilayam by eminent Long-time devotees of the Lord!

The Evening session on Jun 22nd opened in full Divine glory with Veda Parayanam by Balvikas boys. The Devotional songs rendered beautifully by the Balvikas girls titled ‘Premadhaara’. ‘Sanathana Sanskriti’, a cultural drama by the Balvikas children very effectively brought to the fore the mindset of the current generation and their constant inner battle on choosing the right over the wrong! Few thought-provoking topics – The Mother and the motherland, Ceiling on desires, Environmental degradation, Unity in Diversity and the greatness of Bharatiya culture were intertwined into a beautiful garland of musical drama with colorful dance & songs by the our Balvikas children and presented to the Almighty in all humility and devotion!

The unique illustration of environmental degradation and its negative impact on mankind through Miming– a novel form of portrayal of events using gestures and movements alone supported by powerful sound effects in the background, was very well received by the devotees, evoking a thunderous applause!! The Drama concluded on a musical note as the Balvikas Guru positively transforms the student’s mindset and his misguided notions about our country. The student who was in pursuit of the seemingly greener pasture changes his mind, decides to stay back in India and enroll in Sri Sathya Sai Seva Organisation to serve and transform the world!!

Sai Bhajans were rendered by the district youth team followed by Mangala Arathi and Divine Darshan of our Beloved Lord.

Gratitude cards and Greeting cards creatively hand-made by the Balvikas children, youth etc showcasing their intense love for Bhagawan were placed at the Divya Sannadhi of the Lord during the sessions!! 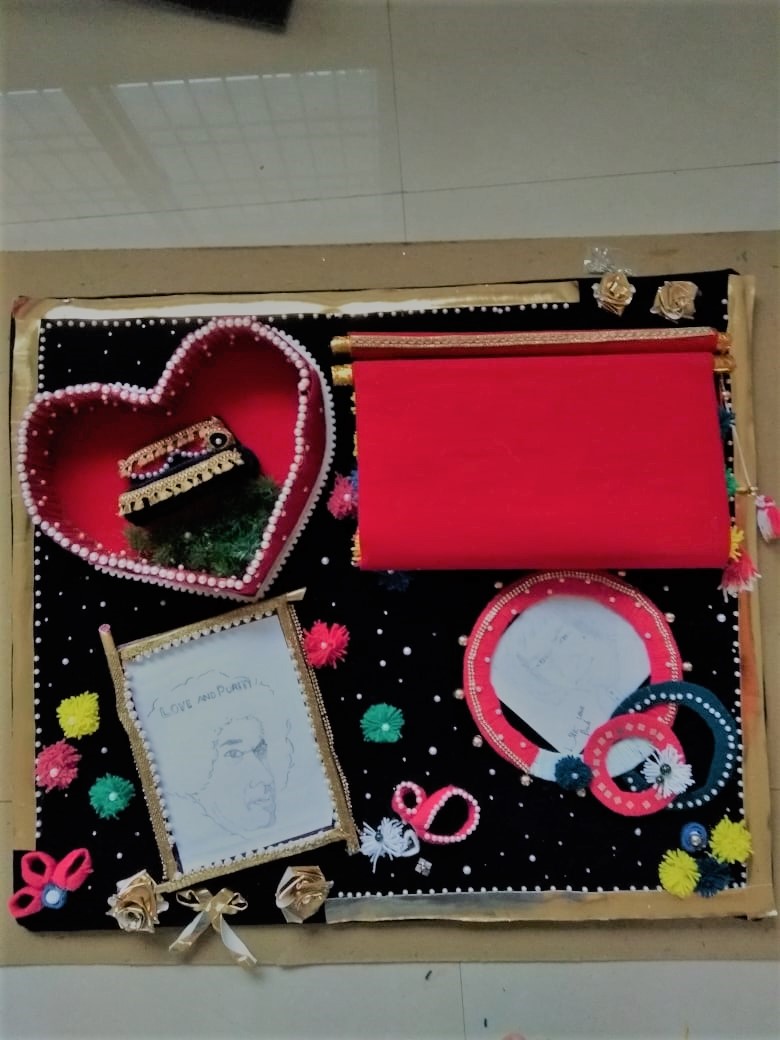 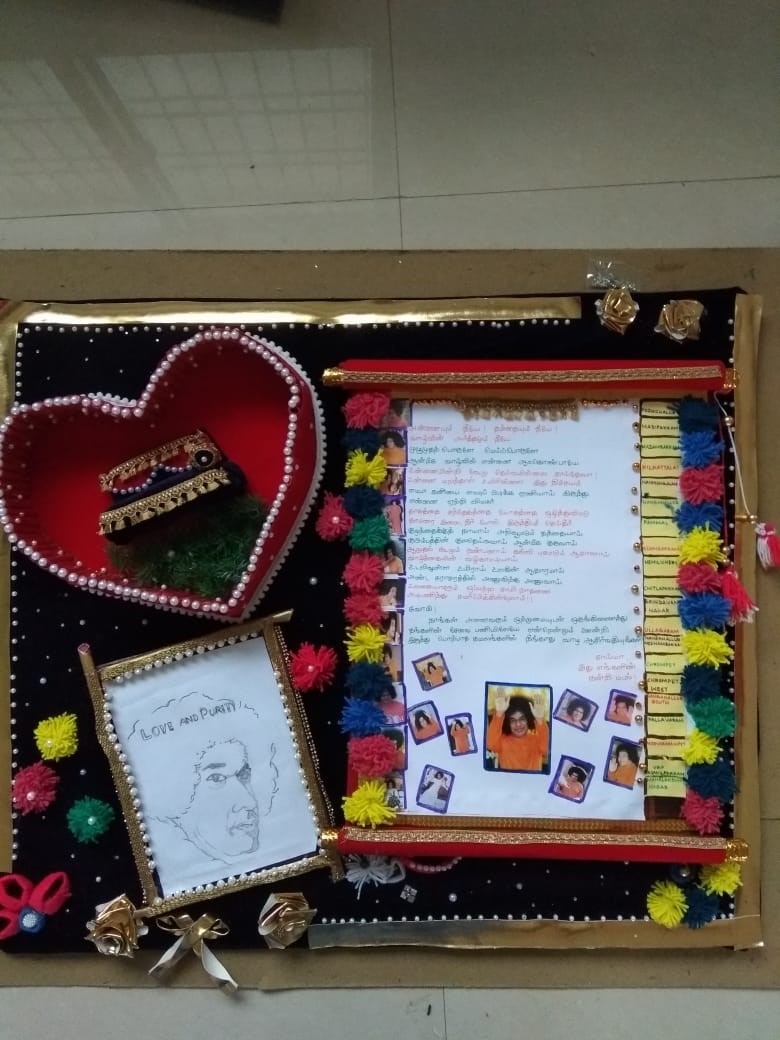 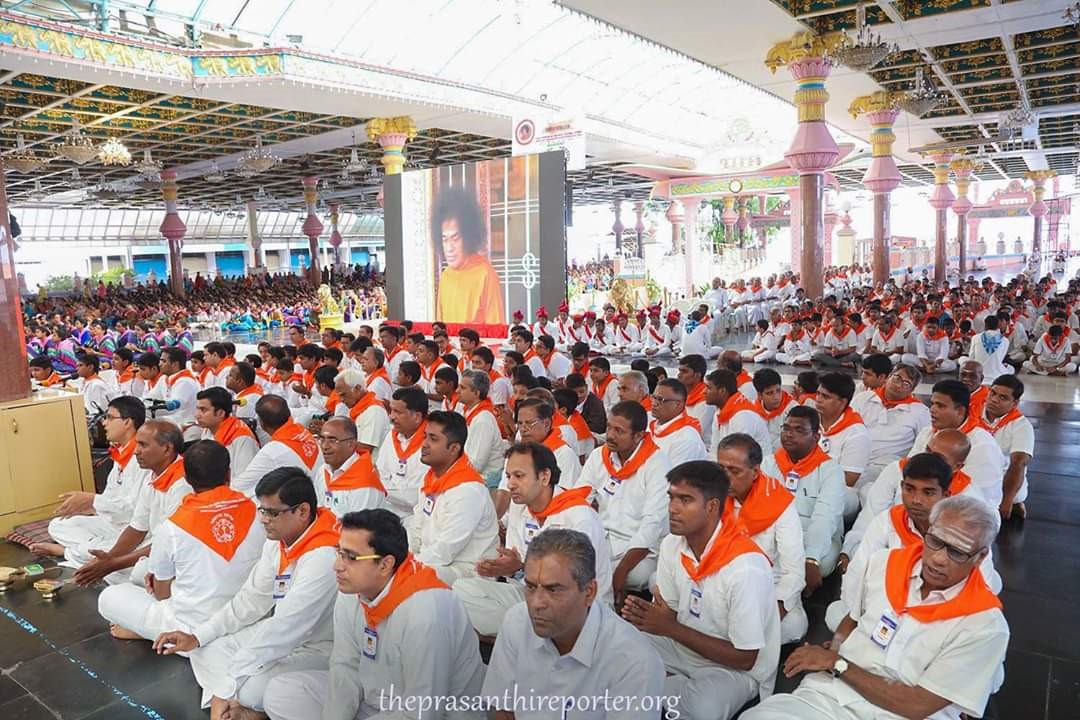 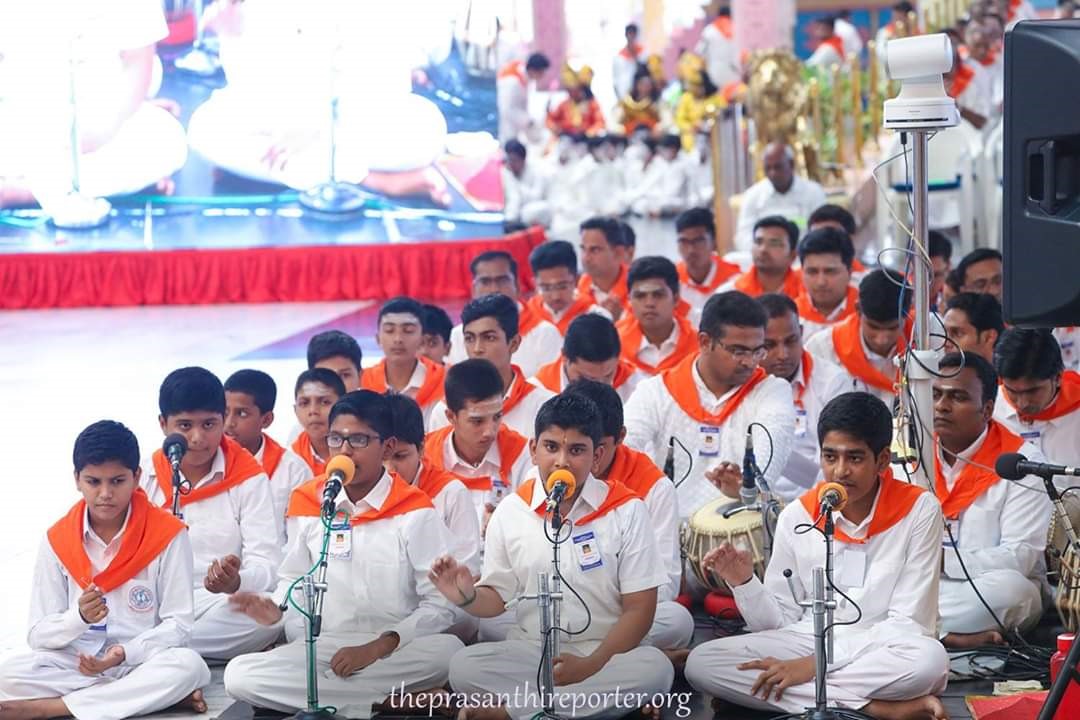 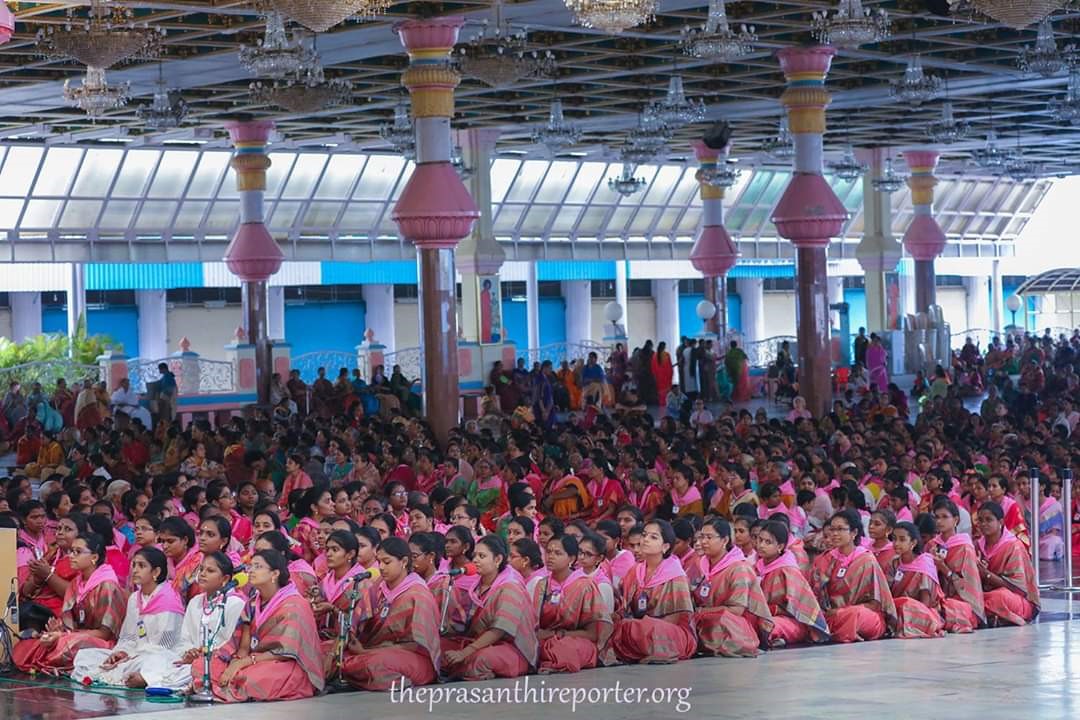 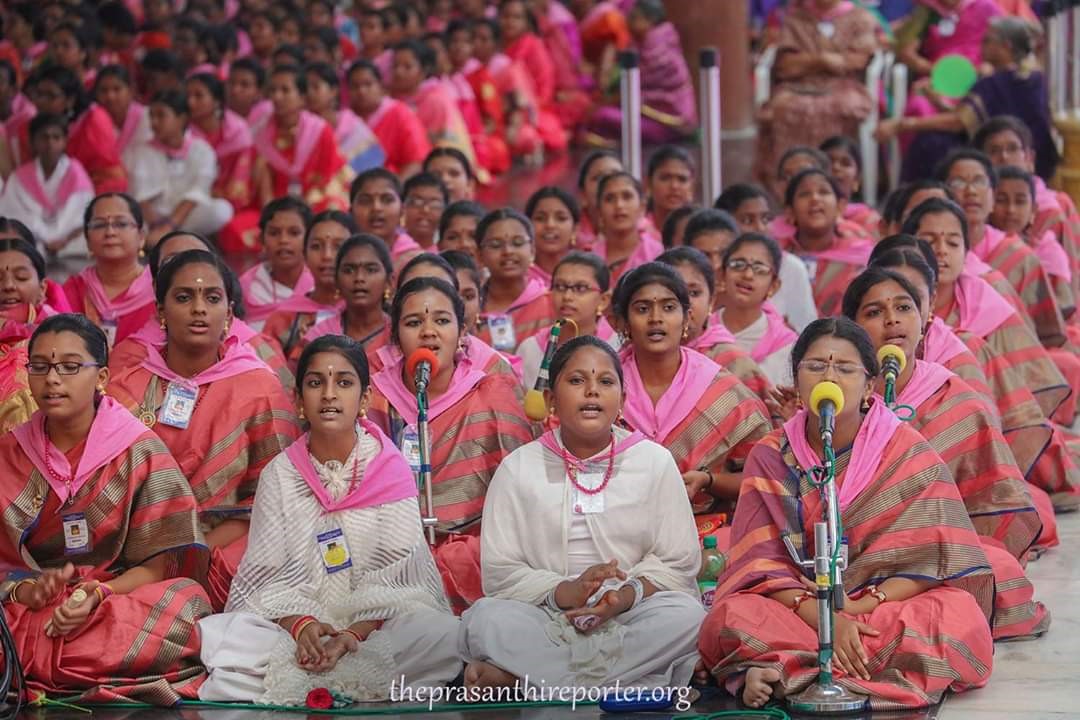 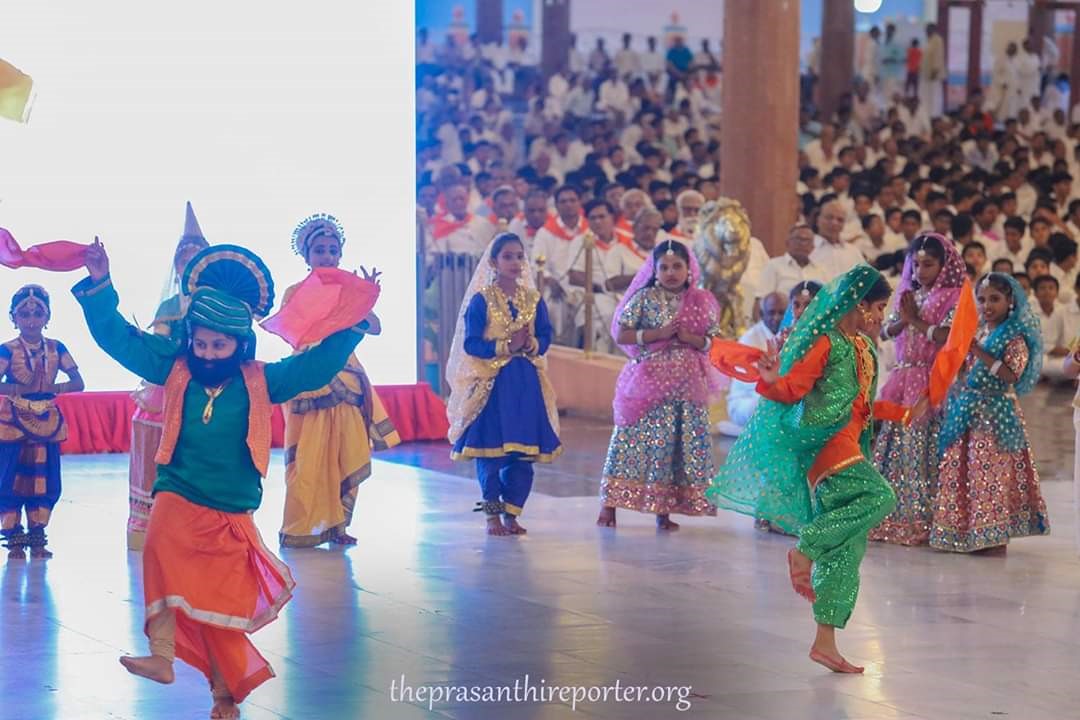 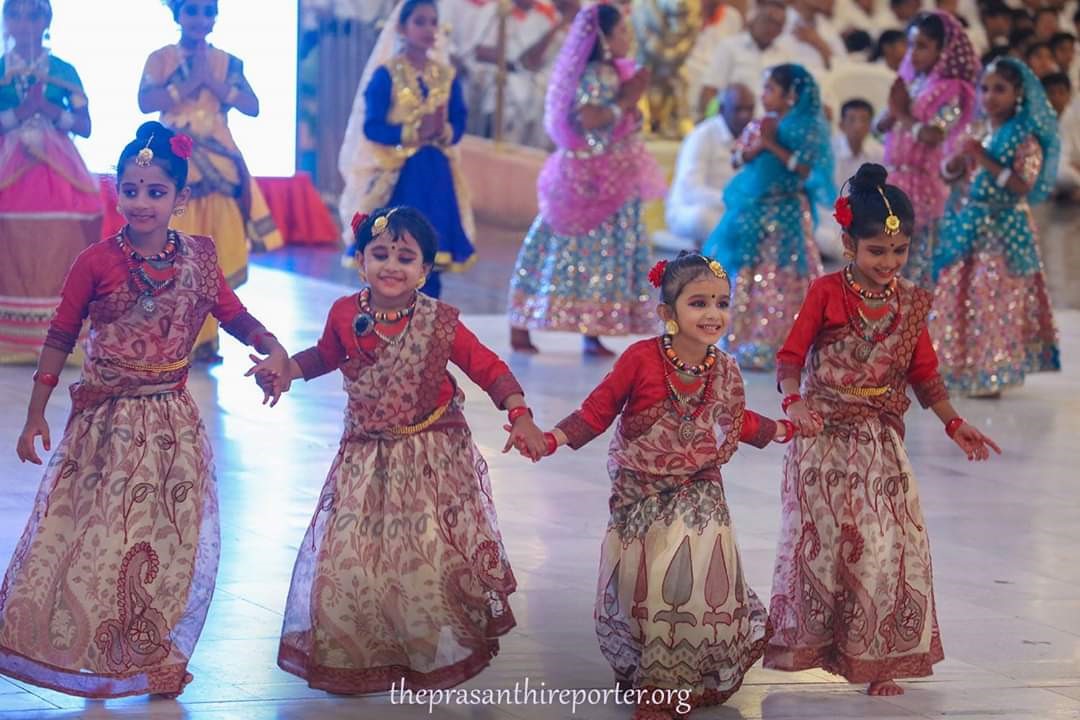 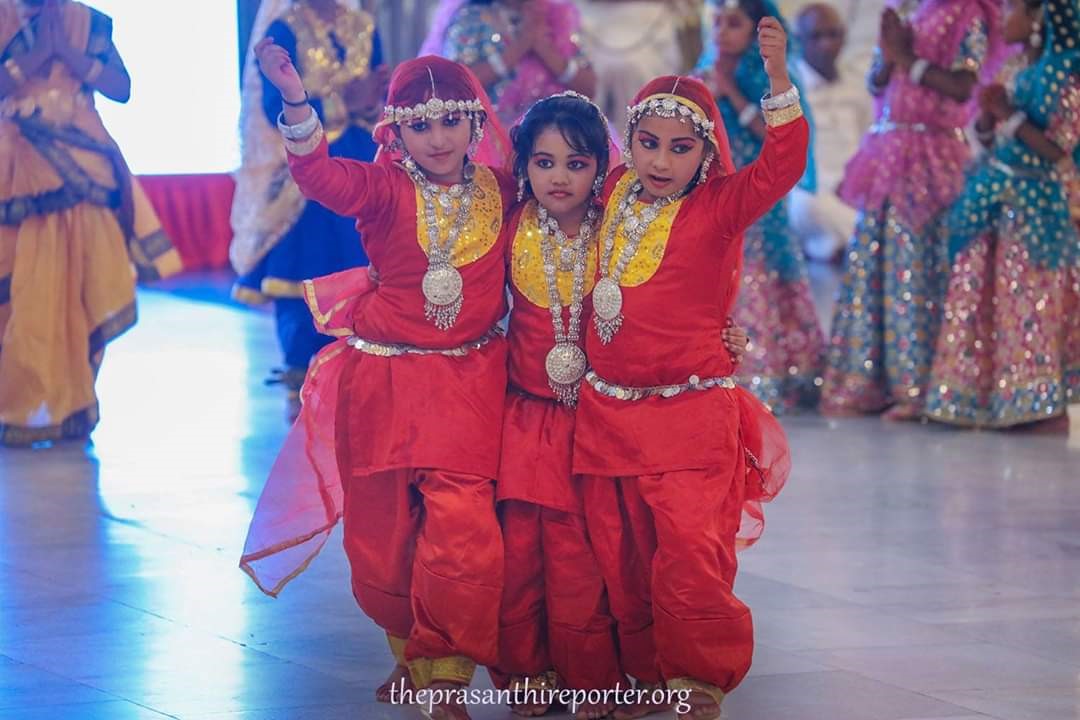 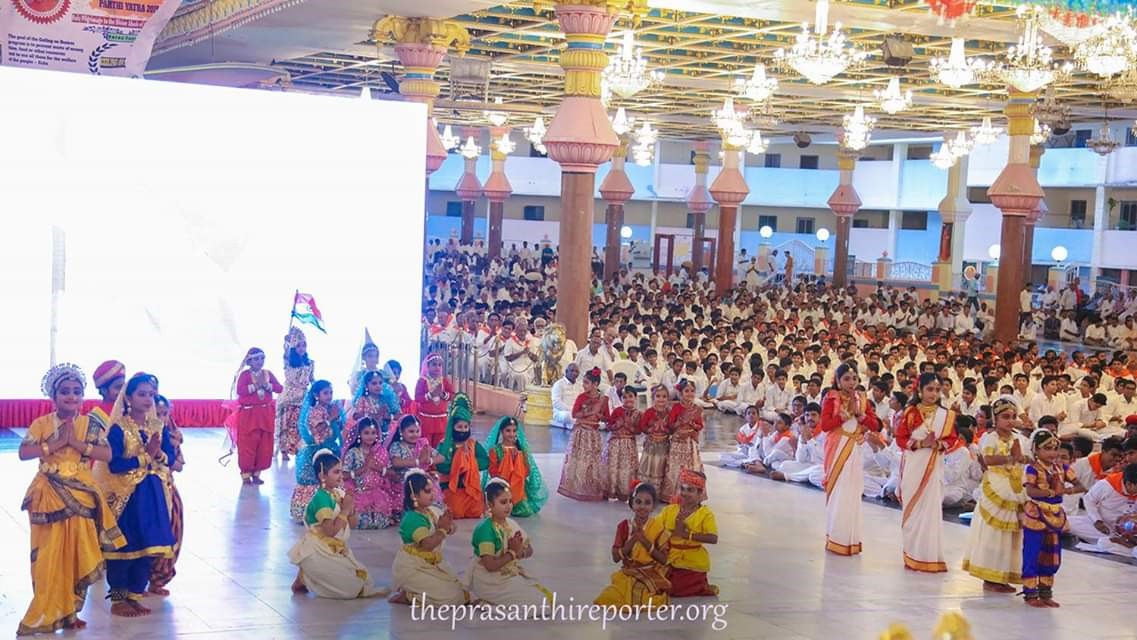 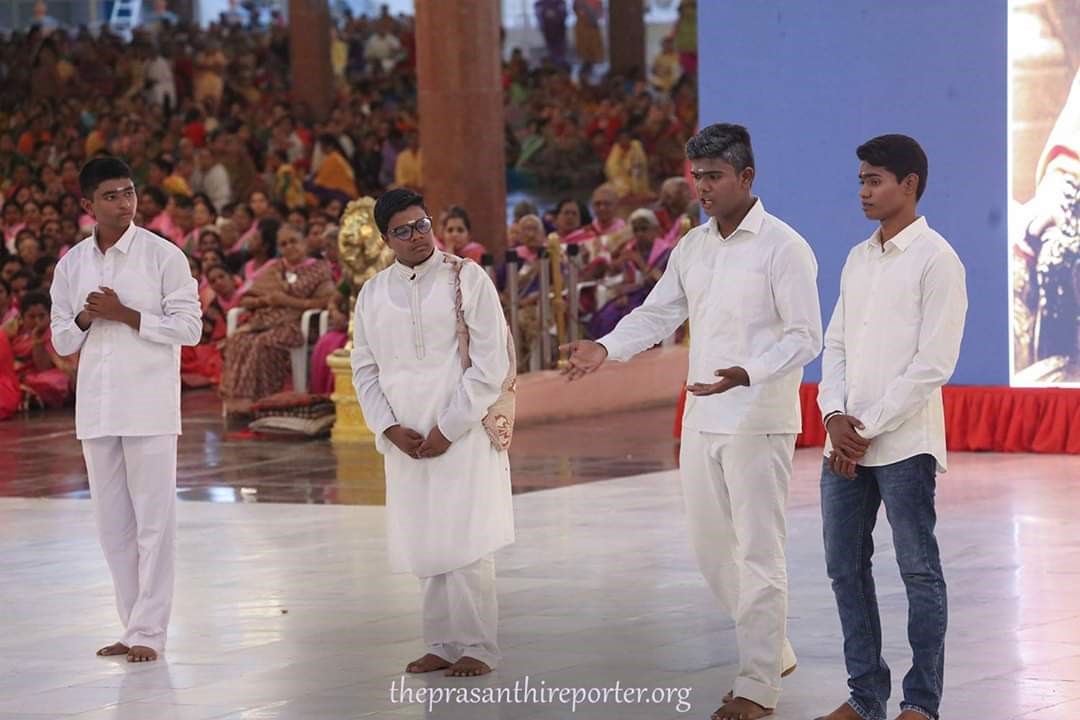 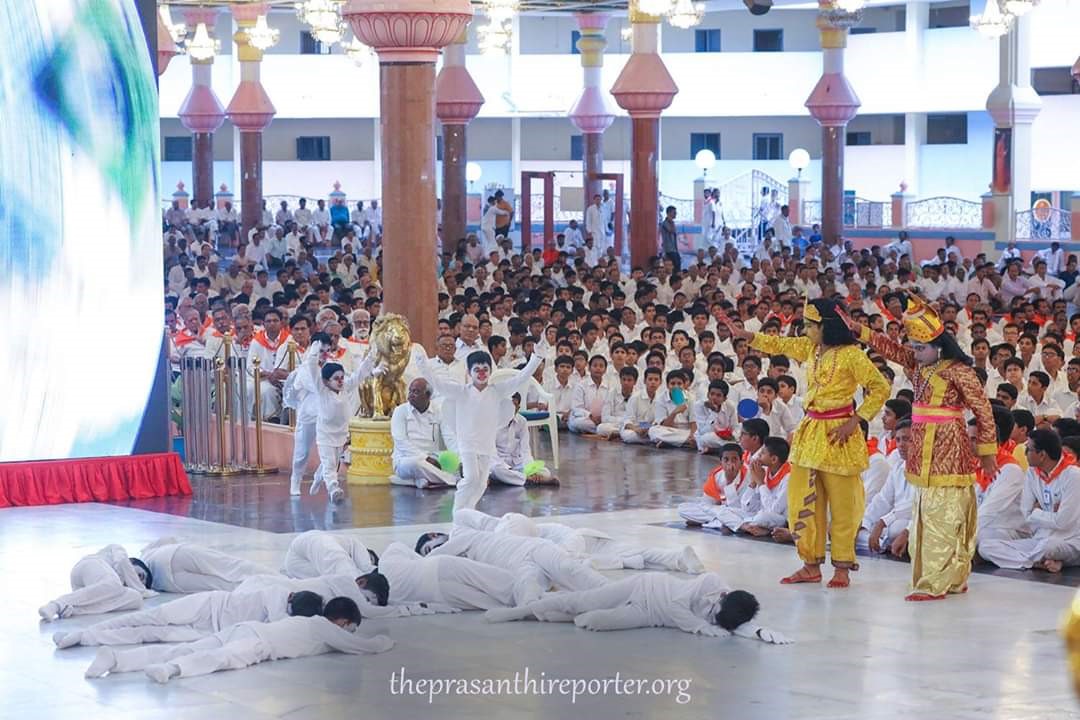 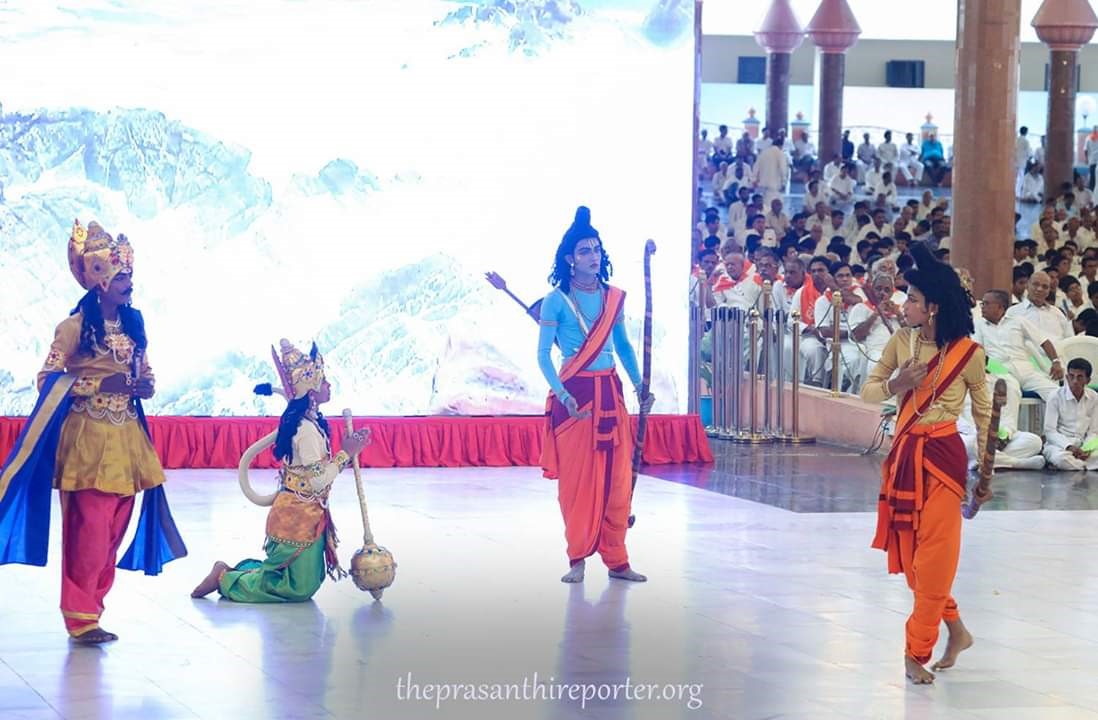 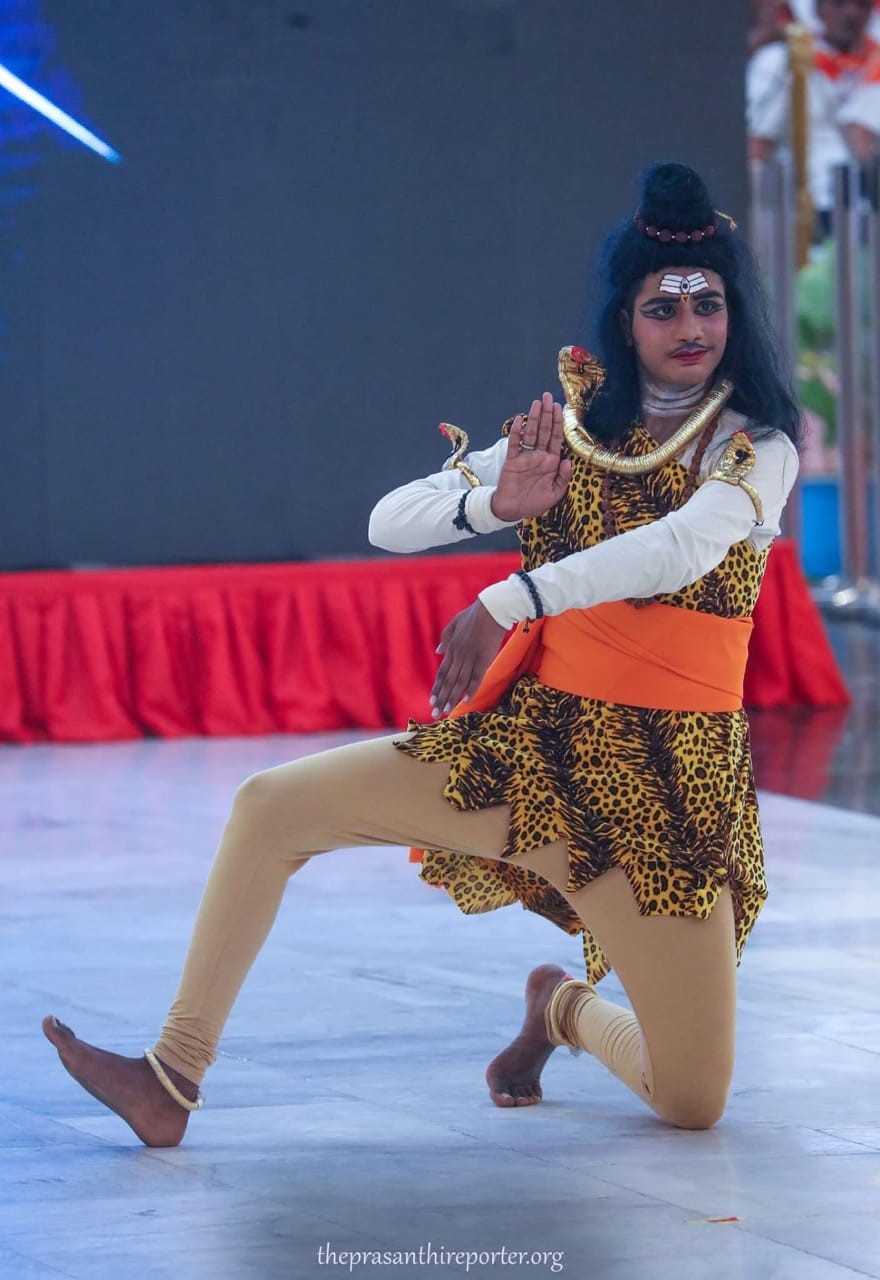 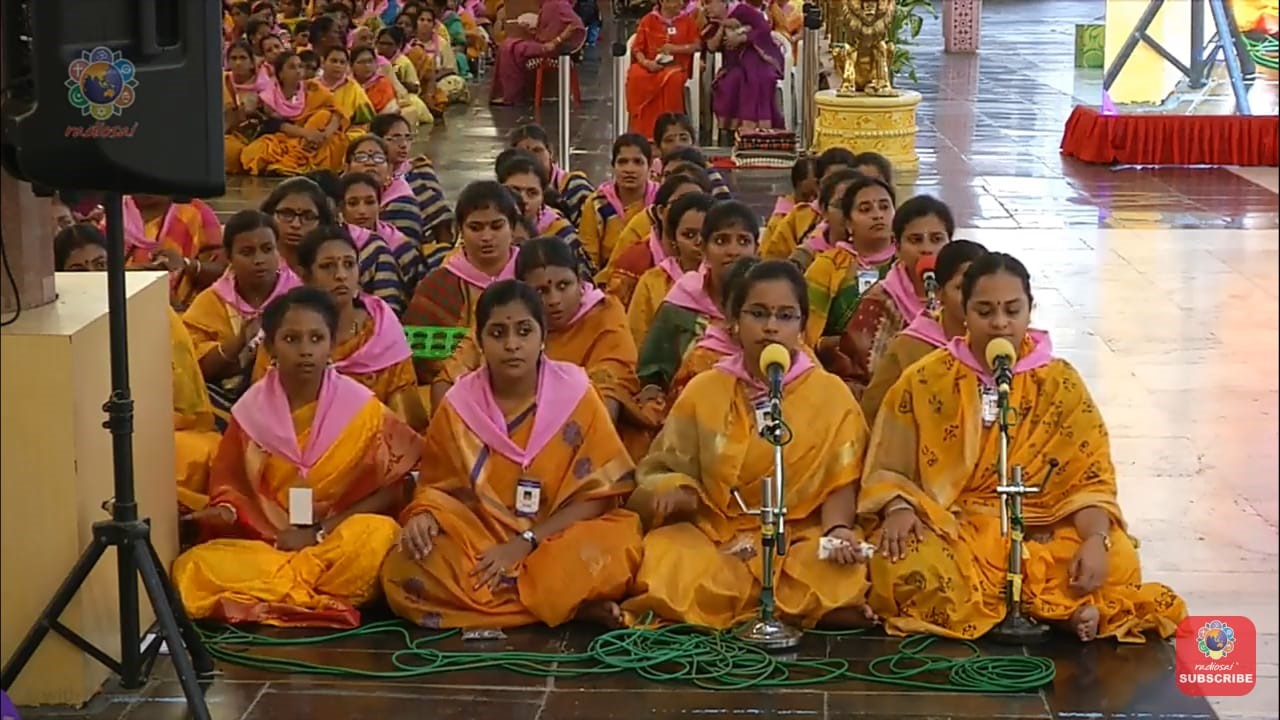 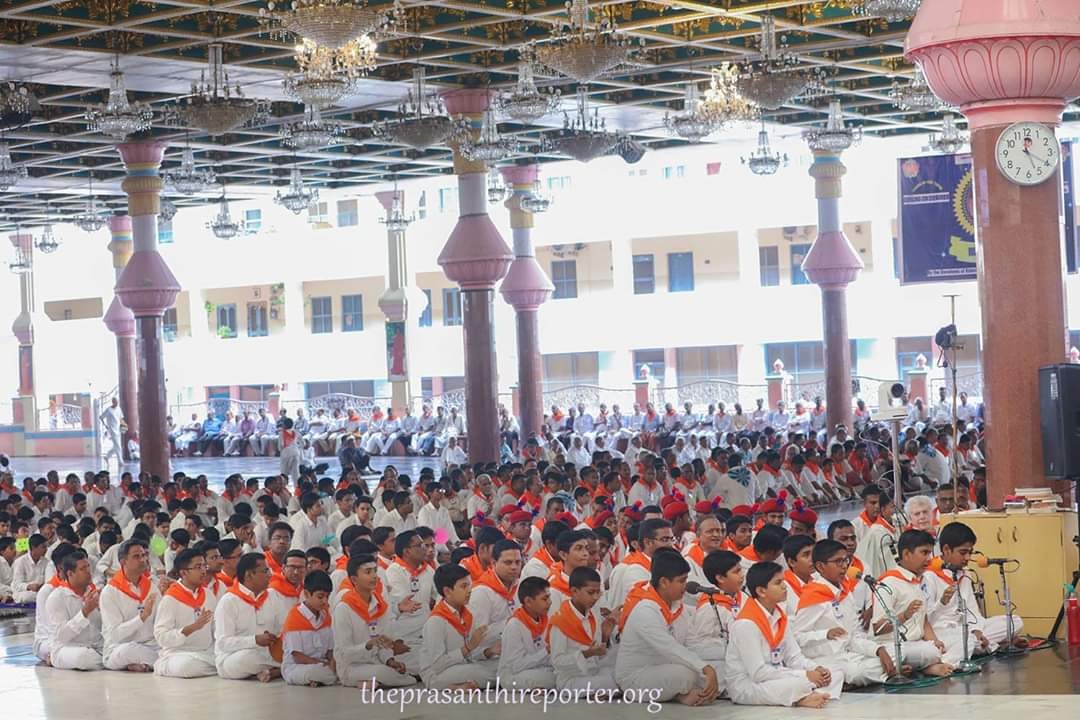